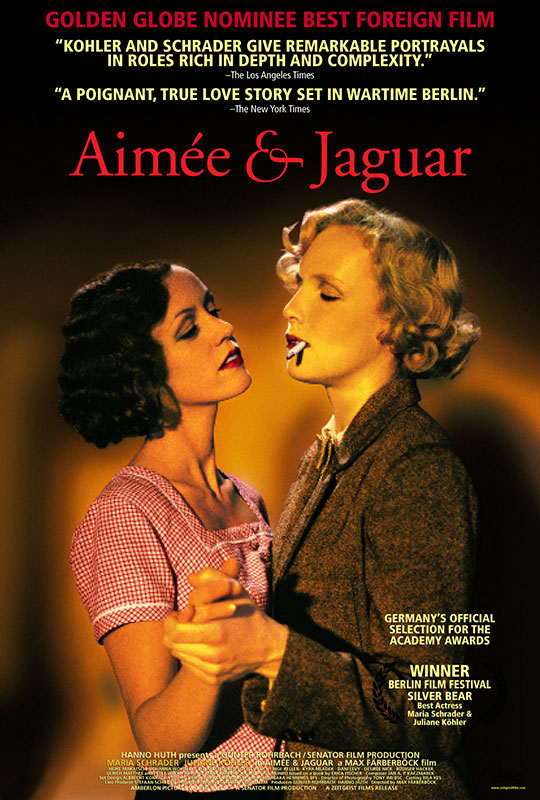 Buy DVD Amazon Instant Educational Orders Open Showings
In 1943, while the Allies are bombing Berlin and the Gestapo is purging the capital of Jews, a dangerous love affair blossoms between two women. One of them, Lilly Wust (NOWHERE IN AFRICA’s Juliane Köhler), married and the mother of four sons, enjoys the privileges of her stature as an exemplar of Nazi motherhood. For her, this affair will be the most decisive experience of her life. For the other woman, Felice Schragenheim (Maria Schrader), a Jewess and member of the underground, their love fuels her with the hope that she will survive.

A half-century later, Lilly Wust told her incredible story to writer Erica Fischer, and the book, AIMÉE & JAGUAR, first published in 1994 immediately became a bestseller and has since been translated into eleven languages. Max Färberböck's debut film, based on Fischer's book, is the true story of this extraordinary relationship. The film was nominated for a 1999 Golden Globe Award and was Germany's submission for the Best Foreign Language Film Oscar. Both actresses received Silver Bears at the 1999 Berlin International Film Festival for their portrayals of "Aimée" and "Jaguar".

After studying at film school in Munich, Max Färberböck first worked for Constantin Film, and then as assistant and dramaturge for Peter Zadek at the Schauspielhaus Theatre in Hamburg. He directed plays at theatres in Hamburg, Heidelberg and Cologne, was the director and co-author of several episodes in the Fahnder TV- series, until he began to write and direct made-for-television movies.

His films include Schlafende Hunde, Einer zahlt immer, Bella Block—­Die Kommissarin and Bella Block—­Liebestod. He has won the German Telestar prize three times, the Television prize of the German Academy of Dramatic Arts twice, the Bavarian Television Prize and the Adolf-Grimme-Prize in gold. AIMÉE & JAGUAR was his first feature film.

AIMÉE & JAGUAR was shot over a period of 56 days at the Everest Studios in Cologne-Godorf, and on location in North Rhine Westphalia, Berlin and Wroclaw. Editing and visual post-production took place in Hamburg, sound mixing in Munich.

The film was funded by the Filmboard Berlin Brandenburg, the Filmstiftung of North Rhine Westphalia, the FilmFernsehFonds of Bavaria, the FilmFörderung of Hamburg and the Film funding department of the German Ministry of the Interior