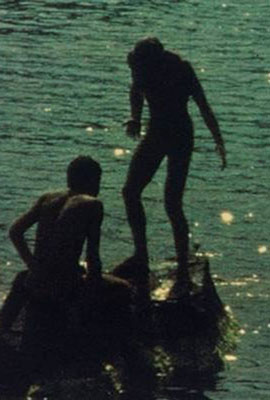 A stunning collage of ecstatic Super-8 fragments, GLITTERBUG is a loving tribute to Derek Jarman posthumously assembled by friends from his prolific filming of everyday events and his experimental investigations of the format. Jarman’s vibrant photography combined with dynamic cutting reveals glimpses into his picaresque life, from London streets to Spanish countryside—with visions of dances, performances, intimate moments and quiet observations. Especially touching are the sequences with longtime muse Tilda Swinton (Oscar winner for Michael Clayton, Grand Budapast Hotel) as she bashfully wanders around gardens, her joyful, intimate interaction with the camera a testimony to her and Jarman’s devoted friendship. Set to a mesmerizing score by Brian Eno, GLITTERBUG forms a hopeful counterpoint to the harrowing BLUE and commemorates both Jarman’s exemplary life as a gay icon and his unique artistic vision.

GLITTERBUG is available as part of the Derek Jarman box set GLITTERBOX which includes THE ANGELIC CONVERSATION (1984), CARAVAGGIO (1986), WITTGENSTEIN (1992) and BLUE (1993).