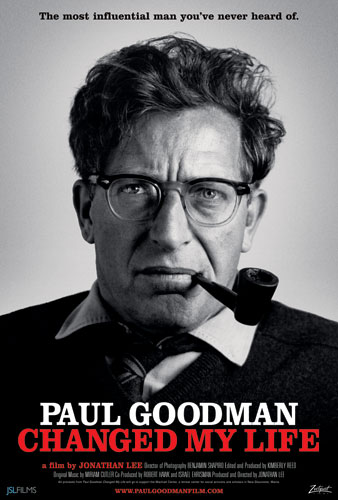 Buy DVD Amazon Instant Educational Orders Open Showings
Paul Goodman was once so ubiquitous in the American zeitgeist that he merited a cameo in Woody Allen’s Annie Hall. Author of legendary bestseller Growing Up Absurd (1960), Goodman was also a poet, 1940s out queer (and family man), pacifist, visionary, co-founder of Gestalt therapy—and a moral compass for many in the burgeoning counterculture of the ’60s.

Paul Goodman Changed My Life immerses you in an era of high intellect (that heady, cocktail-glass juncture that Mad Men has so effectively exploited) when New York was peaking culturally and artistically; when ideas, and the people who propounded them, seemed to punch in at a higher weight class than they do now. Using a treasure trove of archival multimedia—selections from Goodman’s poetry (read by Garrison Keillor and Edmund White); quotes from Susan Sontag, Martin Luther King, Jr. and Noam Chomsky; plentiful footage of Goodman himself; plus interviews with his family, peers and activists—director/producer Jonathan Lee and producer/editor Kimberly Reed (Prodigal Sons) have woven together a rich portrait of an intellectual heavyweight whose ideas are long overdue for rediscovery.

“His impact is all around us.”
–Noam Chomsky

“Paul Goodman was not ahead of his time but IN his time.”
–Grace Paley

“Any page by Paul Goodman will give you not only originality and brilliance but wisdom, that is, something to think about. He is our peculiar, urban, twentieth-century Thoreau, the quintessential American mind of our time.”
–Hayden Carruth

“There has not been such a convincing, genuine, singular voice in our language since D. H. Lawrence. Paul Goodman’s voice touched everything he wrote about with intensity, interest, and his own terribly appealing sureness and awkwardness.”
–Susan Sontag

Jonathan Lee served as producer of the FEAR OF DISCLOSURE PROJECT, a series of videos that explore the act of revealing that one is HIV+ or has AIDS, which began with a video by the late Phil Zwickler and David Wojnarowicz. Under Leeâs direction, the project produced and distributed (IN)VISIBLE WOMEN by Ellen Spiro and Marina Alvarez, NON, JE NE REGRETTE RIEN (NO REGRET) by Marlon T. Riggs, and OUT IN SILENCE & NOT A SIMPLE STORY by Christine Choy.

From 1995-2003, Lee was the founder/director of the Maine Speakout Project, a statewide organization that trained and deployed volunteer speakers to share their personal experiences as sexual minority Mainers with mainstream groups throughout the state. In 2003, Lee returned to New York City to begin working on PAUL GOODMAN CHANGED MY LIFE. He is presently developing a non-profit retreat center, The Machiah Center, for activists and scholars, in New Gloucester, Maine.

Produced and Directed by JONATHAN LEE

Produced and Edited by KIMBERLY REED

“The time is surely right for a Goodman revival. There are aspects of contemporary life that he anticipated and influenced — the gay rights movement, most notably — and others that are sorely in need of his wisdom.... Mr. Lee’s film, in addition to making a persuasive (if partial) case for its subject’s importance, also has a great story to tell, of a 20th-century life that was at once exemplary and idiosyncratic.... it has a passionate, almost prophetic sense of the impact that a writer and thinker can have on his times and the future.” – A.O. Scott, The New York Times

“Three Stars! Paul Goodman Changed My Life is a documentary about a man who changed mine.” – Roger Ebert, Chicago Sun-Times

“The Occupy Wall Streeters could pick up a lot from Goodman’s articulate demand for solutions.” – Ty Burr, Boston Globe

“REVELATORY.... Perhaps it’s a tribute to the breadth of Goodman’s life that even after 90 minutes, it feels as if we’ve just scratched the surface. B+.” – Sam Adams, The Onion A.V. Club

“A richly detailed account of the volatile personality and incredible mind that fearlessly and aggressively pursued a unique and candid form of truth.” – Max Berlinger, Out Magazine

“The most influential 20th-century thinker you’ve probably never heard of.... As bluntly humanist and free-ranging as its subject.... There’s more of a need for Paul Goodmans than ever.” – Mark Holcomb, The Village Voice

“Watching Jonathan Lee’s Paul Goodman Changed My Life was like spending an hour and half in the company of an open flame, radiating verbal brilliance.” – Arlene Goldbard, arlenegoldbard.com

“Jonathan Lee’s soulful documentary testifies to the tragic ease with which our own culture dispenses with such unclassifiable figures.” – Jacob Silverman, Tablet

“Lee presents this formidable character as simpatico with today's zeitgeist.... His belief in popular, 'spontaneous uprising'...is gaining currency globally in a movement that would rally to Goodman's declaration that 'most professionals are finks.'” – Bill Weber, Slant Magazine

“[Paul Goodman is] worth connecting or re-connecting with.... it is this cheering idea of him as utopian sexual and societal prophet that Lee’s film brings back most seductively.” – Dan Callahan, The L Magazine

“The documentary will reawaken interest in a fascinating, multifaceted figure... Philosopher, poet, sociologist,pacifist, psychologist, writer, anarchist, open bisexual and spokesperson for a generation, Paul Goodman ranked among the most influential thinkers in the latter half of the 20th century.” – Ronnie Scheib, Variety

“In the end, Paul Goodman Changed My Life is a bittersweet film, freighted with a melancholy not unlike its protagonist’s, hoping and working for a better world, but uncertain of a future run by fallible human beings. If Lee seems to be actively urging his audience to bring Goodman’s writings and thought back into the forefront of public debate, that’s not at all a bad thing. As an old movie ad campaign said the year after Goodman’s death, boy do we need it now.” – George Robinson, The Jewish Week

“Honest and unafraid, Paul Goodman was one of the most penetrating social critics of postwar America. Jonathan Lee’s documentary captures the power of the man’s presence and ideas. Viewers will likely beat a path directly to the library, hungry for more.” – Casey Nelson Blake, Dept. of History, Columbia University 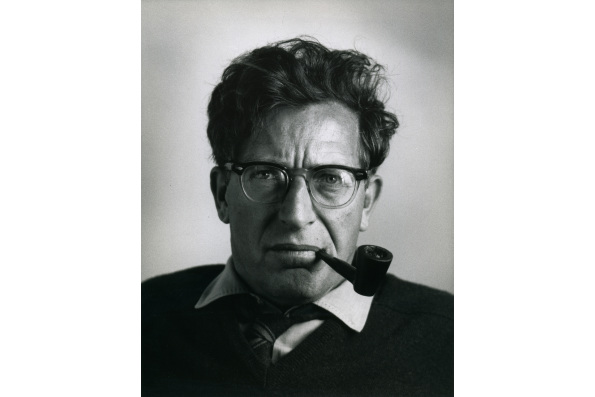 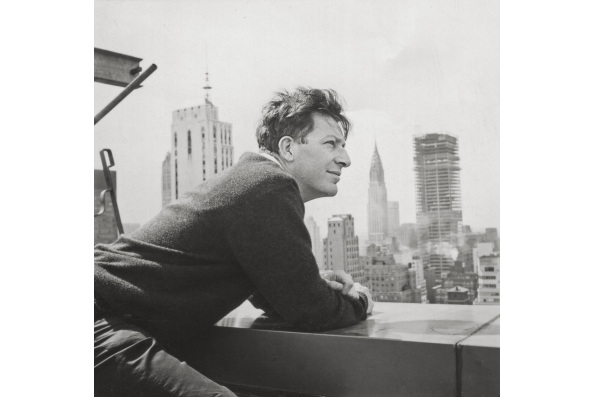 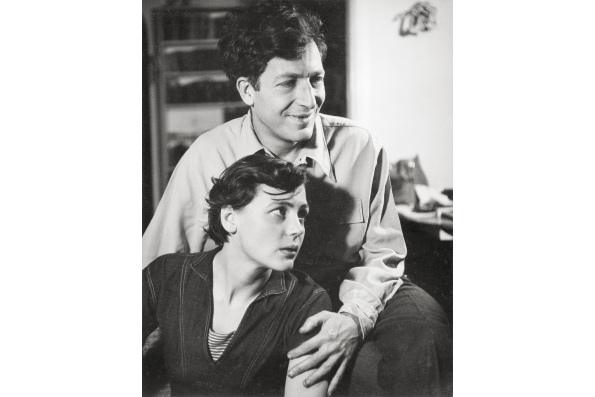 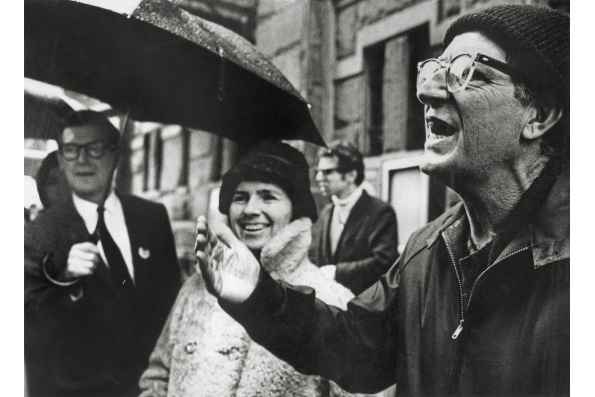 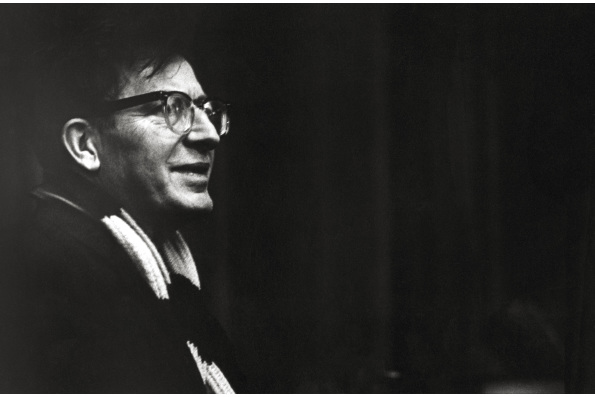 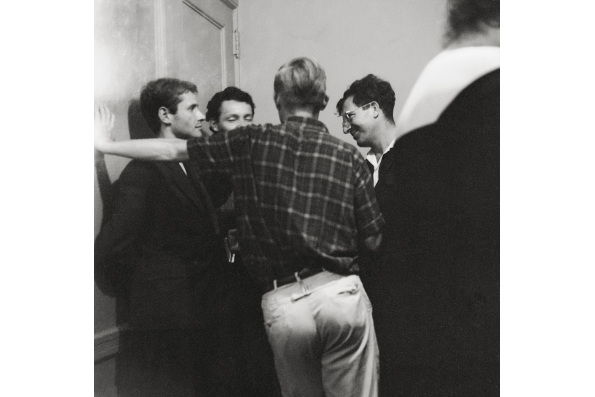 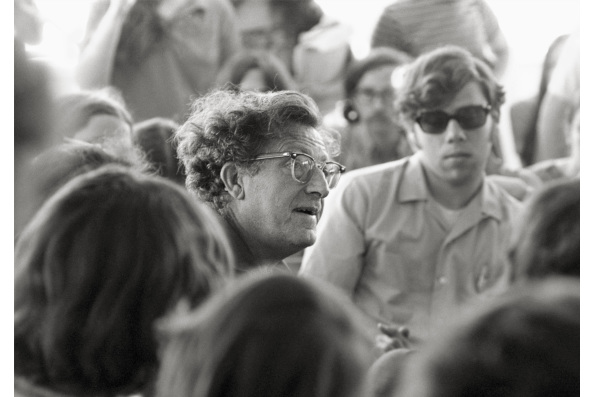 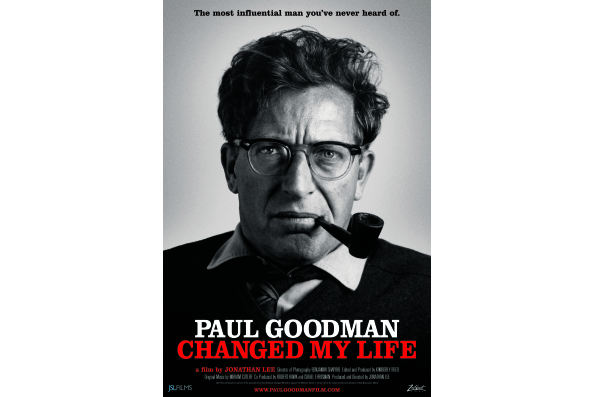